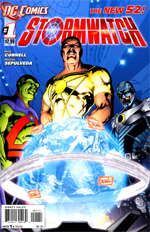 Okay, I love the first couple of volumes of the Authority (I finally got around to buying the trades yesterday) and this has me all giddy about those characters again. Very exciting to see some of my favorite familiar faces back like Jack Hawksmore, Jenny Quantum (the spirit of the 21st century), the Engineer and of course Apollo and Midnighter. In equal parts due to their appearance, their original use of superpowers and their bad-ass personalities these characters are among the very best of the spandex crowd to have arrived fairly recent.  It will be really interesting to see how this team will interact with classic DC characters. A tip of the iceberg was already shown, as Martian the Man Hunter is part of Stormwatch (as well as the Justice League). Basically, Stormwatch is the interdimensional secret superhero police. This new series is basically Stormwatch trying (very unsuccessfully) to get Apollo to join them because they want someone with ‘Superman-level’ powers. But then the roguishly handsome Midnighter sweeps all the members of Stormwatch off their feet to hit on Apollo: ‘I’m the Midnighter. With your help, I can kill every evil bastard on the planet. Interested…?’ (Cheers for my favorite couple in comics) Great art too! Oh, and what’s with the shimmering red cloaked guy that’s showing up in all the new 52 first issues?
Art: 8             Writing: 9       Overall: 8.5 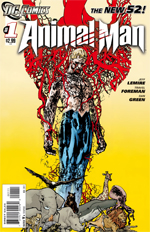 This introduces Buddy Baker, aka Animal Man, just as I remember him. This guy can tap into the morphologic field of all the world’s fauna, to use the animal characteristics he needs. A superhero despite himself, yet foremost a family man. The first half of this issue tells you everything you need to know, neatly and elegantly. Without spoiling too much, first we get to know him and his wife and two children in his home environment. Then he puts on the costume to stop a guy who’s holding hostages in the children’s ward of the local hospital. In this sequence we learn about the kind of hero Buddy is. He´s hesitant to use violence, much rather trying to talk conflicted persons out of their troubles. Lastly we see one of his nightmares, which is portrayed wonderfully disturbing and then we see him waking up to see the weirdness has hit his private life again… Okay, now that´s a creepy cliffhanger… …well, maybe it´s not so much the cliffhanger that’s creepy, as much as the visuals of it (keep away from the last page if you’re allergic to dead animals). Nothing wrong with the writing here, leave it up to Jeff Lemire to rock his keyboard and make some magically good comics. Now the art though… Until the relaunch announcements, I´d never heard of Travel Foreman. And in the lead up to the relaunch his work got pretty hyped. And although I love the cover, and this issue´s dream sequence, I just couldn´t get into the rest of the art. It´s not bad, just not my kind of style I guess. It improved throughout the issue, but not enough as I´d like. Something about the rough, detailed line-work and lack of blacks just doesn´t sit well with me.
Art: 7.7           Writing: 9       Overall: 8.4 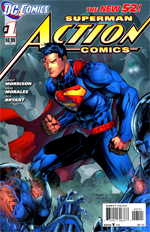 This is a hard book for me to review, I had pretty high expectations, which weren’t met. Which doesn’t mean it’s a bad book, not at all. It’s pretty good, just not quit here nor there for me. Basically it’s whats been dubbed Bruce Springsteen Superman, with his shirt and jeans and working man’s boots. He’s a little edgier than we’re used to, threatening non-super powered villains with death. He’s also a lot more brash, making statements to the media that: ‘You know the deal Metropolis. Treat people right, or expect a visit from me.’ He seems to be standing up for the little people more than ever, which I also like. It gives him a bit of a political activist edge. Also, this issue introduces familiar mainstays like general Lane, Louis Lane, Jimmy Olsen and Lex Luthor. Plus a great Morrison idea of weaponizing the city against the man of steel. Art was pretty good, reminded me more than a little of Mark Bagley on Ultimate Spiderman for some reason. Come to think of it this whole issue kinda feels like the ultimate take on Superman: He’s younger, has to start from scratch in modern times, gets deconstructed to the ground, hmmm… Well if it worked for Spidey, it surely can’t hurt Supes. Plus if Bendis can pull something like this, I think Morrison should be able to do it well enough too.
Art: 8  Writing: 8       Overall: 8

Come back tomorrow, to see if I can add anything new to my already extensively formulated love for Locke and Key. As I review the latest issue of Locke and Key. Clockworks…