Runners up for week 38: Criminal. Last of the innocents 4, Gladstone’s 5, Ultimate comics Spidey 1

In this final issue we learn whether or not Riley Richards gets away with killing his wife and manipulating everyone close to him over some money issues. If you thought Riley had made some dire decisions in the previous issues, you’ll be astounded at things he is willing to do in this issue. The art, by Sean Philips, starts out a bit worse than it has been in the rest of this series. The main initially character doesn’t look like he had earlier in the series. However, he quickly picks up the high level of artistry from previous issues and ends on a stung note. Basically, this is the story of a man who has let his life go down the drain and is willing to do literally everything to get things back like they were in his youth. Even if it means he will have to live a lie (and even fool himself) for the rest of his life.  These four issues provide an illuminating peek into the darkest corners of a human soul. It’s not fun, but boy is it good!
Art: 9              Writing: 9.5                Overall: 9.2

This is one of those series that takes well-known concepts and puts an entirely original and invigorating spin on it, in this case it plays with the tropes of the superhero genre and changes it up by telling a story from the viewpoint of the children from super villains, and their everyday life at a school for super villains. This issue is just heaps of fun, fun, fun! It’s impressing how, so far, with every new issue we learn something new about the characters and the world they live in. This issue sees Kid Nefarious banding together with his classmates to head out to earth (issue one explains that Gladstone’s is located on Mars) and defeat the Red Stormbreaker, the superhero who defeated all their parents. A fun detail is that Kid Nefarious learned about comic books for the first time, last issue. Now he’s constantly got his head in old comic books where he reads about the exploits and repeated defeats of his (and his classmates) parents, by Red Stormbreaker. Figuring that as villains their parents have never worked together to best Red Stormbreaker in combat, it’s up to their combined powers and education to restore honor to their parents’ legacies. This issue has great faux silver age art as well as great, dynamic action scenes by Armand Villavert.
Art: 9              Writing: 9       Overall: 9 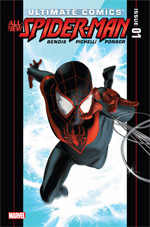 Wow, this was really great. I just love the fact that Marvel’s ultimate editorial team is daring to put their ass on the line and do away with the old. This really feels like what the Ultimate line was ment for, putting new and unexpected spins on a bunch of characters we know through and through. The new Spider-man, Miles Morales (who isn’t Spider-man just yet) feels like a real, three-dimensional person. Brian Michael Bendis portrays him as a smart, but insecure kid. His supporting cast (parents and uncle) also feel really real. Plus, while this new guy also gets bitten by an irradiated spider, it looks like he has some interesting and original powers of his own. I´m thrilled to find out more. I really hope eventually we get to see some of the supporting characters from the old series (most notably Aunt May and Gwen Stacy), because Bendis wrote them so good and they were a very important part of Peter Parker´s story. Oh and the art, is this the first time Sarah Pichelli has done an entire Ultimate Spider-man issue? It’s spectacular, no scratch that, it’s ultimate! Because I always like to get a peek of the creative process, I’ve added this video of Pichelli drawing a page from Ultimate Spider-man:

What do you think? Cancel reply