Part 4 of the Romano Molenaar Interview: Entrepreneurialism, contracts & the strain on family life

So this is it. The last part of my four-part creator spotlight interview with Dutch comic artist extraordinaire Romano Molenaar! While he was working on Birds of Prey issue 23, page 16, I asked him about the business side of things and how his extremely busy work schedule impacts his family life. Let this be a lesson, from one 15 year comic industry veteran to all aspiring artists: Drawing comics is all fun and stuff, but it also asks for some mayor sacrifices if you want to do this for a living…

When you look at a lot of big name artists, they are often also smart entrepreneurs…
Yes, that’s something that sometimes seems to be missing in the Netherlands. One artist has a lot of plans, but is not there yet qualitatively, while there are also people who really do top work and who go: “Gee, I can draw, now what do I do?” And I’m always trying to see with the projects I have on standby and in the Art Kings studio, what else can I do with them and what would be interesting now. That’s part of the business side of the trade. Finding a comic to draw is great fun, but what can I do with the name that I have built during the last fifteen years? How do I improve my chances of getting my foot in the door at video game companies? If I tell them I’m currently working for DC that opens a few doors. That’s why I regularly keep myself busy with the business side of things.

Talking about the business side of things, does DC allow you royalty rights?
Yes, I think with DC, when you sell 75.000 units, you get royalties. Only Birds of Prey sells about 17.000 a month, so we’ve still got a long way to go… However, I did receive an amount of royalties from the digital sales of Birds of Prey. That arrived rather unexpectedly, but it was a nice surprise of course. It wasn’t a staggering amount of money. But it does work, DC is very well aware of the sales numbers and it’s further incentive to the creators.

Is my assumption correct that the addition of royalty rights into freelancer contracts reflects an improvement in the way creator rights are handled by the ‘big two’ compared to the nineties?
Even for my Marvel work [in the nineties] I once received a royalty. For my Top Cow work I didn’t because they weren’t big sellers. But they had a similar type of construction. I believe that nowadays every contract has some kind of construction that when you sell above a certain threshold you receive royalties.

So, were you in a position to negotiate hard about your contract with DC?
Of course you’ll make a price agreement for the page rate. And you agree or you don’t. In my case, I was like: I have a studio here, I’ve got Storm,  so I won’t let this opportunity pass. As an artist, you can choose not to go for the top rate -I can tell you, the top rate ain’t bad- but instead do it to build your name. That way you’re investing in your résumé, and the money will come later, when you can sell yourself at a better price. 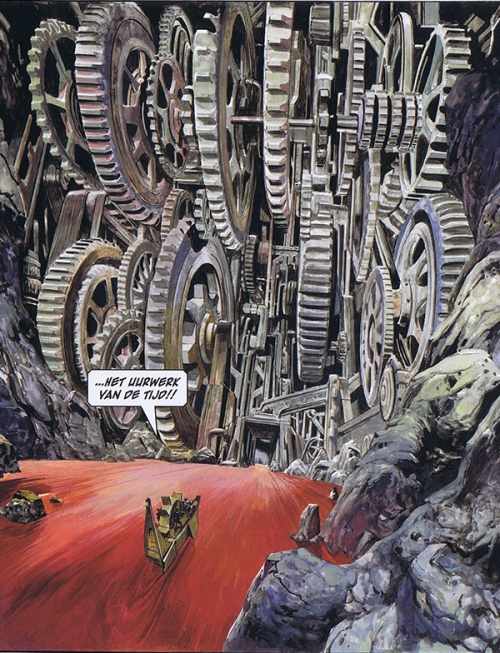 When we began talking Romano told me he works from nine in the morning till twelve at night. Only interspersed by driving the kids to and from school and dinner. I asked him how his work schedule influences his family life?
It means it’s pretty hectic and there are some things I just don’t do very often. I don’t watch movies, I don’t watch TV -or I watch the news at half past one in the morning. Now that I work from home I see more of my children than ever before, and my wife of course. So that in itself became a win-win situation. The hard part of this is that I am home but not readily available. With children that’s sometimes difficult: When they want you to play or when they ask you to come play football outside… Then it all depends on my workload and schedule, whether or not I’m able to play with them. Sometimes, it’s not possible. On the other hand: if I’d just go to work in the morning, I would definitely not be able to. That’s tricky sometimes, when they do see their father but he cannot come along.

How old are your children?
I have identical twins, 10 years of age. They are now at an age that they are very curious and want to learn a lot. Of course I’ll answer them, but then I go: “Sorry, I have to continue working.” Being kids, they don’t always understand. But I have a spacious studio, so they occasionally come and play with me or make some music –I’ve also got some instruments in my studio- and sometimes they draw or colour along with me. That’s always a good time. So, that’s nice enough, no complaints there. Only other things… [exhales] ….like, parties… …If I really want to go to a party, I must really plan ahead in my schedule to decide if I can make it. It sounds harsh, but then the party really has to be worth it, to make the time. That’s sometimes difficult for people to understand: I’m constantly under a whole lot of pressure, because of my work.

What’s your general outlook? Is the time you’re currently putting in a temporary situation?
I’ve been doing it like this for something like fifteen years… So it’s become a bit ingrained. But now that I get older –and especially having children- I look at the hours I’ve put in and sometimes wonder whether it’s worth it. How do my career and the things I’m allowed to do relate to the time I spend working and the things I’m constantly giving up? That’s something you have to think about, now and then. This thinking usually leads me to conclude that I’m still having super much fun. Also, my wife doesn’t know any better, she understands that this is my passion. So the general idea is that I can do what I want with my drawings and she’s supportive of that. That support is very important to me. When I find out she’s no longer 100% supportive, we’re going to sit down and have a good conversation. Because to me, it’s not worth turning my personal life upside down. I’ll go pretty far, but we check in now and again to see if we’re still enjoying the ride. Occasionally this leads to the consideration: “Am I going to do this or not?”

Thanks so much again to MR Molenaar for taking time out of his schedule to talk to me. If you missed part one, part two, or three  you can always listen to the whole interview (in Dutch) through the Open Your Geek Mouth podcast, or find a paper version in the Dutch comic magazine Strips2Go. That’s it for now… I’m already busy with my next interrogation victim Boykoesh, of Captain Ultimate fame!

What do you think? Cancel reply