Book of the week 36: Locke and Key. Clockworks 2

The cover of Locke and Key. Clockworks #2, with art by Gabriel Rodriguez, published by IDW.

And once more it befalls writer Joe Hill and artist Gabriel Rodriguez that their comic is my book of the week (just like seven weeks ago, and ten weeks ago). It’s really easy to make this my pick again, however it’s pretty hard to write something new about this series (since I already wrote about how great this book looks and how wonderful it reads twice already).

If you haven’t read anything of this series, I think you could pick up this issue and enjoy it. But if you don’t read the previous four volumes you’re really doing yourself a disservice. To shortly pitch this series to new readers: it’s about the three Locke kids who live in Key house, in the town of Lovecraft (Massachusetts), with their mother and uncle. Throughout Key house, there lay hidden a hundred different keys, with diverse magical properties (one to open heads, one to open a portal which turns you into a ghost, one which turns you into a giant, one which turns you into an animal etc…). One of the keys has the power to end the world as we know it (the Omega key) and that is the key that the main bad guy Lucas ‘Dodge’ Caravaggio is after. Dodge has gotten his hands on a couple of the keys and doesn’t shy away from using lethal force to get what he’s after.

Another beautiful splash page by Gabriel Rodriguez, from IDW's Locke and Key. Clockworks #2.

The latest issue of Locke and Key. Clockworks, picks up the story again, after the events of the last volume (Keys to the Kingdom) and a little bit of (much appreciated) background information got to us in the last issue. While the Locke kids think that the bad guy is dead, he’s actually closer to them than ever, and well away to achieving his nefarious goals.

The inside of Tyler Locke's mind, as drawn by Gabriel Rodriguez. From Locke and Key. Clockworks #2, published by IDW.

Just to show you that this really is a dark horror book (SPOILER) this issue opens with the youngest of the Locke kids, Bode, throwing another kid under the school bus. Another example, showing just how fantastical this story is at certain points (SPOILER): the girl, Kinsey Locke, had removed her hate and fear from her head, using the Head key. Since then, the embodiment of her hate and her fear were confined in a closed-off coke bottle (they actually drowned in the never endings stream of tears of the fear embodiment). This issue, they escape from their bottle, climb into the oldest Locke kid’s (Tyler) head and wreak havoc in there. In part turning Tyler into a self-pitying, destructive crybaby. Just to show the amount of thought that the creators put into this book: the embodiment of Kinsey’s hate is wrapped up in newspapers. Reading this issue I discovered that the newspaper headings change every panel, to address something that’s currently happening. I’ll have to go back and see if they did this from the start. If so, that’s some pure genius Easter egg hunting material!  And just an example of the godlike artistry of Mr. Gabriel Rodriguez: I have never seen shards of broken glass flying through the sky depicted so beautifully as this: 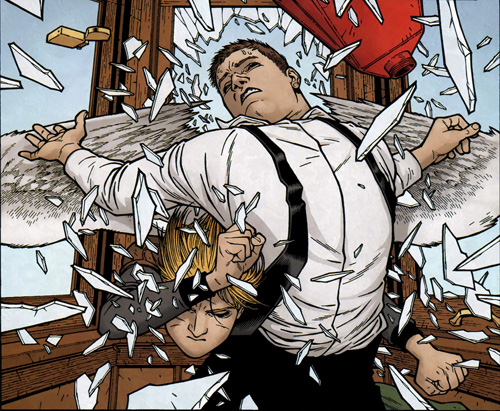 Really, have you ever seen any better shattering glass in the pages of a comic? Art by Gabriel Rodriguez, from IDW publishing's Locke and Key. Clockworks #2.

Book of the week 29: Locke and Key. Clockworks 1

Wow. For those that have been reading this blog from the start it’s already obvious what a big fan of IDW’s Locke and Key series I am. For all the others, let me try to explain the genius of this wholly original series by writer Joe Hill and artist Gabriel Rodriguez (warning this part contains mild SPOILERS concerning the plot of the first 24 issues): Over the span of four six-issue miniseries the reader learns to know the Locke family, consisting of teenagers Tyler and Kinsey, their inquisitive little brother Bode and their mother. In the first issue of the initial mini-series (Welcome to Lovecraft) the father gets murdered, after which the kids and their mom relocate to the town of Lovecraft, Massachusetts, to inhibit the family estate Keyhouse. In this first series we get to know the characters a bit, for example we learn about brooding teenager Tyler’s guilt about his father’s death. This introduction to the characters however, forms the backdrop of young Bode finding a dark spirit-like ‘echo’ in the well house and ends with him being forced to release this being. Throughout the series we learn about the existence of strange and mysterious keys with magical properties that are hidden throughout Keyhouse. Bode keeps finding these keys and experiments with them. Throughout the course of the series, his older siblings learn about the existence of the keys and use them to their own advantage, as well as to fight the dark force that has been released from the well house. This being is looking for one key in particular, namely the ‘black key’ and does not shy away from killing anyone that gets in his way. While this alone would be enough to produce one hell of a story, the book is elevated even more by the way Joe Hill portrays the characters through believable dialogues and realistic interactions, that make the characters get under your skin. Like the greatest works of fiction, this is not only a book about horror and magic, but more so about emotional interactions.

This issue takes place around Keyhouse in the year 1775. All the characters are new and this initially leads to some confusion about what is going on. We get introduced to some forefathers of the twentieth century Lockes, some familiar locations are visited and a whole lot of explaining gets done. For starters we learn the significance of the drowning cave and the hydraulic pumps, but most importantly we learn the origin of the magical keys.

On the writing side, this issue is pretty wordy and I found the first half a bit hard to get trough. The second half however kept me turning page after page, while an unsettling feeling settled in my gut and my heartbeat steadily rose. Not only do major plot points get some background, also the link to the works of H.P Lovecraft gets made very explicit. Not only do we get a reference to the fabled icy desert plateau of Leng, we even get some chanting of Lovecraft’s language of the Old Ones: ‘Ia! Ia shubniggarauth!’. While this issue left the cliffhanger of the previous volume dangling, it delivered a whole new dimension of terror to the story.

Three random (parts of) panels from Locke and Key. Clockworks 1, with art by Gabriel Rodriguez. Do you see the Dillon (upper), Allred (middle) and Corben (lower)? Or is it just me?

Art wise, things were beautiful as always. I find it hard to describe Rodriguez’ style, but this issue I thought I recognized a bit of Steve Dillon in the earlier pages, a hint of Mike Allred in one of the splash pages and further on a dash of Richard Corbin. I’m not saying Rodriguez is aping these artists! These are just little bits of resemblances I see here and there. All in all a great start to this fifth volume of Locke and Key. Seriously go and buy it!
Art:9      Writing:8.7         Overall:8.9