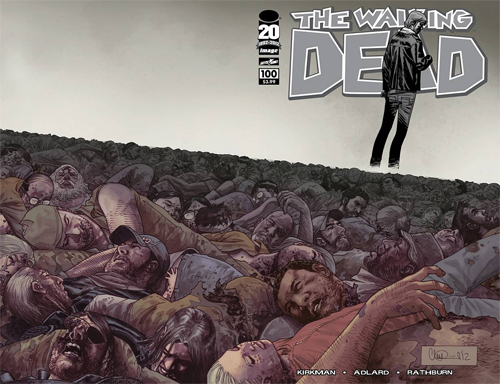 1. Walking Dead #100 (Image comics)
With a hit television series; a great video game; a table top game; action figures; statues; t-shirts; novelizations; and the news that this anniversary issue has become the best selling single issue of 2012, the Walking Dead really doesn’t need any more hype. Still, it’s one hell of an achievement that Robert Kirkman and Charlie Adlard (and Tony Moore) have come this far with their little zombie book. The remarkable feat of reaching one hundred issues isn’t what’s most noticeable about the latest issue though: It’s the strong character driven plot and the emotions it evokes in readers.

This anniversary issue is a real stomach turner. I won’t spoil anything specifically, so rest assured and read on. In the last couple of issues Rick Grimes and his little community of survivors have reached out to a larger community not far from them. When they learn that this Hilltop community is being extorted by a man called Nagin and his gang of enforcers, Rick offers to deal with them. At first it seemed to work, twice Rick and his people encountered Nagin’s followers, and twice they killed most of them, sending the survivors back to tell Nagin that the Hilltop is now under their protection. In this issue, we get an idea of the size of Nagin´s gang as they retaliate and randomly choose one of the main characters to make an example of. 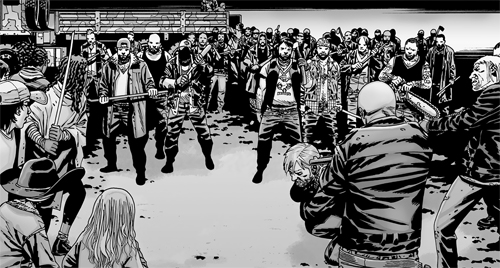 Again, labeling this book as merely a zombie book is doing it a huge disservice. Sure there´s some zombies getting their heads chopped off. And, sure the story is set in a world gone to hell because of the dead rising with a bad apatite. But really, this is a story about survival and the strains that such extreme situations put on relationships and society as a whole. It´s because of Robert Kirkman´s choice to focus on character interaction, instead of mindless zombie whacking, that the gruesome horrors that fictional characters inflict on each other drive straight home with a sickening emotional sucker punch. Case in point is the death in this issue. Here we see a character that was introduced in the first couple of issues having his or her head brutally bashed in, right in front of his or her loved ones. A character that, time and time again has proven him or herself as crucial to the survival of Rick and his people. A character that had just found some happiness in this post apocalyptic wreck of a world. The character that just a couple of pages before his or her death utters the phrase: ‘I can’t stop thinking about tomorrow. I never used to do that.’ A character that was built up so strong that readers will miss him or her like a real person. Heck, I couldn’t stop thinking about that scene the rest of the day. My mind kept going back to all the good memories about the character and the five pages that show the horrific last moments in shocking detail.

On that last note, this issue isn’t just an issue filled with horror for horror’s sake. It sets up Nagin as a villain that makes The Governor (remember him?) look like Mary Poppins and changes the status quo of the series: Just as everything seemed to be looking up for Rick and his people, they now find themselves in a new bleak situation, which I can’t imagine they can easily get out off. Still, I can’t wait till Rick gets his hand on Nagin. 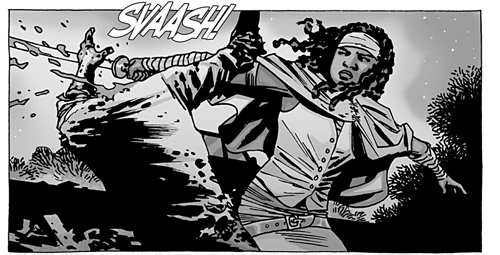 I’m not sure what to say about the art. It was as fantastic and dire looking as can be expected from Charlie Adlard. Although I have to wonder what his reaction was when he first read Robert Kirkman’s script. I can’t imagine how hard it must have been to render some of the stuff in here.
Art: 9              Writing: 10     Overall: 9.5