Last year when it originally came out, I didn’t give this series a fair shot, as it was written by this newcomer Jonathan Hickman, and had nothing to do with Nick Fury or the Supreme Headquarters International Espionage Law-enforcement Division. I got the first issue, read the first couple of pages and declared it crap. This week, after listening to John Hickman on the Wordballoon podcastmy interest was sparked and I sorted through my shortboxes to find this issue. And concluded that I had really done myself a disservice for not taking this series seriously. It turns out to be wonderful. It plays on some Marvel continuity Easter eggs (Egyptian En Sabah Nur joining Imhothep’s resistance, cameos by Howard Stark and Nathaniel Richards), while delivering a wholly original and smart story, that may well be retconned into Marvel cannon.  In this first issue we follow this young guy named Leonid, who has unspecified superpowers (and shows the black of the universe in his shadows). Leonid is taken into this organization called the Shield (called after Imhothep’s shield) and taken before the High Council in the Immortal City under Rome. Here, it is explained that the Shield knows “the final fate of Man“, and that their mission is to ensure nothing threatens the world before this occurs. A great premise and some seriously beautiful art by Dustin Weaver. I can’t wait to dig into this the next couple of weeks!
Art: 9.5               Writing: 8.5      Overall: 9 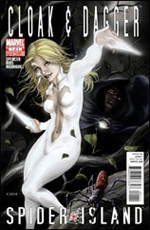 I’m not following this whole Spider Island thing, I’m not a big fan of Dan Slott’s Spider-man and something about this event just didn’t click with me. I picked this book up, because I’ve been a fan of Cloak and Dagger ever since the days of Maximum Carnage and had heard good things about it on the Ifanboy podcast. I loved how the characters of Tandi (Dagger) and Tyrone (Cloak) were juxtaposed by writer Nick Spencer. I thought that this was most effectively and entertainingly done in two caption boxes where both Cloak and Dagger describe the state of New York, when they first got around to doing some super heroics. Cloak: “Criminals ran the streets, preying on the innocent, poverty and hopelessness were everywhere, it was a den of filth, perversion and greed.” Dagger: “Everything smelled like pee”.  Great stuff… Art duties where done by the talented Emma Rios who gave this book quite a distinctive look. I loved how she constantly drew Dagger surrounded by splotches of lights, while Cloak was followed by dark smudges everywhere. The only thing I didn’t like was the panel where Luke Cage seems to be wearing a plastic witch’s nose. The story was pretty standard, but executed very well. Cloak and Dagger are evaded from their church and get caught up in a fight between the Avengers and a bunch of Spider-men. Plus, we also learn that the near future holds some pretty dark stuff for Dagger…
A8.9       W8.4      O8.7

The short of it is: if you want to read a good Captain America book, read this and not the McNiven/Brubaker series. Sorry, but this is waaaaay better. The art is (as could be expected) knocked out of the park by Chris Samnee. This is basically an origin story for Bucky and Samnee has adequately tweaked his style to fit the era. The story shows James Barnes growing up at a military base with his father. Young Bucky is always getting into fights and his father discourages him to do so. When his father is unexpectedly killed in action Bucky stays on the base and is taken care of by Mayor Samson. With his father gone, he lets his mean streak out and is never far away from a bar fight. He becomes so adapt at fighting that he gets assigned to some super-special-training, to eventually (unbeknownst to him) become Cap’s partner. Sure, this summary of the story sounds a bit cliché, but the combination of superb art and great writing make this one hell of an entertaining story and I can’t wait for the rest of this series.
Art: 9              Written: 8.5   Overall: 8.7

5. Gladstone’s School for World Conquerors #4 (Image comics)         8.5
This is my favorite new series out of Image this year, and it continues strong. The opening pages are full of action, while the rest is both sugary sweet (finally the romance between Mummy Girl and kid Nefarious kicks in) and funny. With great linework and exceptional colors, this is a beautiful book. The kids visit Mummy Girl and her dad Thoth to study for the mystical relics exam. But to do that, they first have to fight through a swarm of Ammut’s Stone Guardians of the Dead. This is a great all ages superhero book. If you’re not reading it, you really should check it out. This issue had me cracking up, when asked about comic books, Mummy girl suddenly sets of on a rant (for a preview see image below).

Great, human, emotional. This book offers a serious origin for the man who would become Captain America’s greatest foe. While it coincides smartly with the release of the recent Captain America movie, this is not one of those throw-away, money grabbing movie tie-ins. Au contraire, for those familiar with Greg Pak’s Magneto testament, it’s clear that this series is a well researched documentation of fictional characters in a sadly non-fictional history. While the title characters of both books originate from brightly colored superhero comics, Pak’s World War Two titles are anything but colorful and do not contain superheroes (or anything fantastical for that matter). It tells the story of the young Johan Schmitt, who grows up in an orphanage in Germany at the time that Hitler’s NSDAP is gaining power. The kid is the victim of a terrible and violent life and before long starts to commit his own acts of violence… The story seems to be terribly historically accurate and rife with truthfulness. The only reason the writing is not perfect is because of the lack of resolution. This issue shows the first and a very terrible step to becoming a monster, but it doesn’t resolve enough or go into what comes next.
Art: 8           Writing: 9         Overall: 8.5 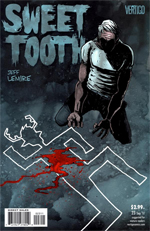 What to say about Jeff Lemire’s art? Other than that it’s mighty fine, it’s dark, moody and expressive and quite distinctive. I’m guessing a lot of mainstream comic readers are turned off by his style… …they are wrong. As to the story: While Gus and co finally find themselves in a safe place, tensions between the different individuals are rising to a boiling point. This leads to the characters having to make choices. Gus and Jepperd want to keep moving to Alaska, while the girls want to stay sheltered in the Dam. Meanwhile the professor sows seeds of distrust that are presumably based on the bible scribbles of Gus his dad. Screw X-men schism, if you want to read about a group of characters that gets torn apart because of circumstances, read Sweet tooth… I really admire the way that Lemire has woven a tail of postapocalyptic animal children, intense human drama and a conspiracy that reminds me of the Dharma Initiative.
Art: 8           Writing: 8,5      Overall: 8.3 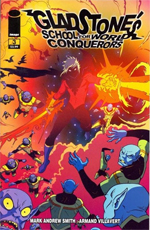 Great original story and interesting set up with a worldwide (?) truce between superheroes and super villains. However, darkness is looming on the horizon because certain villains are rebelling and trying to break the armistice. This issue explains that the villains leave their kids under the impression that there is no truce until they’re seventeen. Interestingly though, we learn of two students of the supervillain academy that are tasked by their imprisoned parents to bring an end to the peace between heroes and villains. Just as last issue I’m immensely impressed by the world-building by creators Mark Andrew Smith and Armand Villavert. In just three issues they have set up a rich and believable world that plays with the usual superhero formula’s, but turns them upside down in a way that’s wholly new to me. And as a central plot device they use a school for supervillains with which they can tell the story through the kids’ eyes. Last time I compared Villavert’s art with Darrow and Kirby, while I still agree with that I think it’s more fitting to put him in the school of art that gave us the Luna brothers and Jamie MCCalvie: Very clean, stylized, illustrating. Again, the only (minor) problem is the lack of backgrounds. Otherwise this title has all the ingredients to follow the success of a series like Invincible… This may be my favorite new book!

Thusly ends my third week as a comic book reviewer. Twelve books graded on average 7,1. Boy, do I like my own taste! Next week, Cosmic Odyssey! I´m reading it for the first time and wonder if it will be just as exciting as when I read the Infinity Gauntlet for the first time…